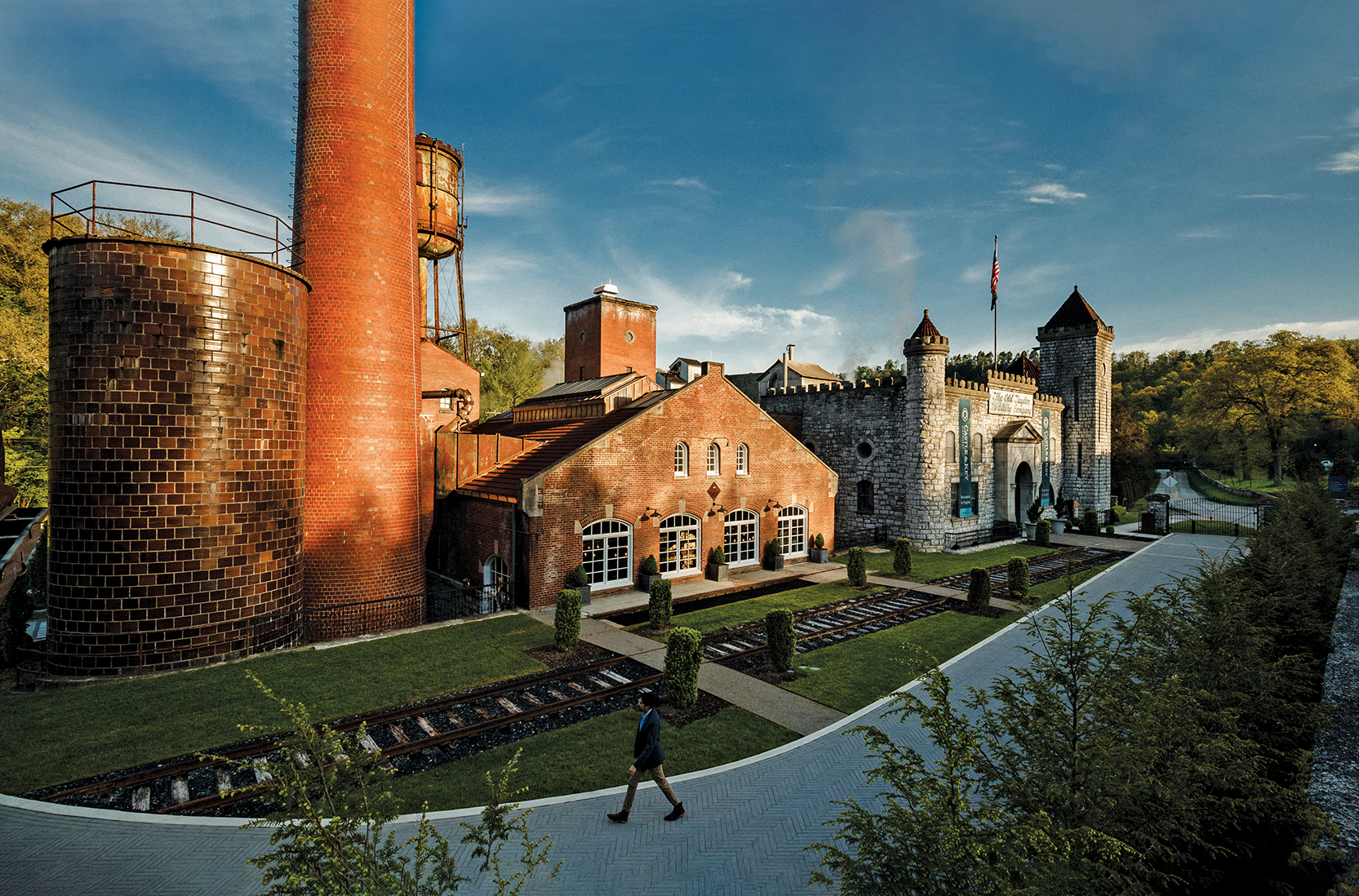 Castle & Key has released its first-ever Bourbon, and the first to be distilled onsite in nearly 50 years

Nestled in Woodford County, Kentucky is the Castle & Key Distillery. It was formerly known as the Old Taylor Distillery, the last distillery Colonel Edmund Haynes Taylor, Jr. built in his lifetime. Shuttered in the 1970s when Bourbon had temporarily lost its luster, Will Arvin and Wes Murry purchased the property in 2014 with plans to restore it to its former glory while building a brand that would make the site’s progenitor proud. A painstaking restoration started right away and, by November of 2016, whiskey was once again being made onsite. The first rye whiskey was released in 2020, and now it’s finally time to taste the first Bourbon to be made onsite in more than four decades.

“The way we view whiskey is a little bit disruptive in the industry,” says Castle & Key head blender Brett Connors. “We take a little bit more out of what you see in limited edition perspective or in viticulture in particular, where we always have kind of viewed our barrels as an organic being. Jon and the quality side of our distillation team work really hard to make stunningly beautiful distillate, that’s definitely a really scientific part of our process. But then, when you go into a barrel, we know chemically what’s occurring, but it’s a lot more wild in a way that’s a lot harder to mitigate and control. We let our barrels to do what they want to do, and then we always view the blending side as more stylistic application. We’re trying to have stylistic continuity in our approach, but we’re also showcasing the work that our distillery team has done, the work that our grain producers did in the field, the work that our barrel producers at Speyside have achieved, and more. Our view is that we get to highlight the work of others, and I think that’s by not having a very heavy hand in the blending process. When you’re trying to focus on archetype or consistent good, what happens is you’re often trying to force things to be something they don’t want to be. And that goes for the leadership side, the way we treat people onsite, as well, but also the way we treat whiskey. We really want our whiskey to be what it wants to be.”

The first barrels of Bourbon are finally reaching that four-plus, almost five, year mark, and, rather than trying to recreate a recipe made there in the past, the team is working to ensure consumers get the best bottle possible, even if it doesn’t match an archetype.

“We generally preferentially lean toward higher proof, but at those higher proofs we don’t want it to be hot,” Connors says. “We’re looking for integrated alcohol expression, we’re looking for the finish to be full-bodied but not overly assertive or drying. Over-tannic extraction on the back side is something I just can’t get over. Also, at higher proof you can’t perceive a lot of those flavors, and something that punches you in the throat on the finish is not an approachable spirit. We like to look at balance. We want our whiskeys to ‘cocktail well’ and drink beautifully neat. You’re going to be able to pour them and enjoy them and not be overwhelmed by them, but not be underwhelmed by them either. In a lot of ways, we just want to make a Bourbon that’s very drinkable, which I think is everybody’s goal, but I think our approach to it is really cognizant of what we want to see out of the product.”

The whiskeys are entered into the barrel at 107 proof, a decision made for several reasons, including gaining more water-soluble flavor compounds earlier in the process and honoring the whiskey-distilling tradition of the historic distillery.

“We let the whiskey guide us where to go,” says Castle & Key research and development manager Jon Brown. “Especially, being in our infancy, we don’t really know exactly how it’s going to age in the warehouse. We have a really unique rickhouse in warehouse B. It’s all brick and the temperature fluctuates greatly – the bottom is cool, even in the summer, the top gets extremely hot – so we have to wait until it ages see how it tastes and guide it in its best direction that it could go. I’m constantly gathering all this sensory data, so eventually we should be able to kind of predict how we think our different whiskeys will age in the rickhouse, but right now are going a little bit blind. We do have experienced folks here that have worked at other places, and we do have an idea about how whiskey ages in general, but every rickhouse is going to be a little bit different, especially in the little valley that we sit in here.”

Currently, samples are being pulled from 350 barrels at a time. Those samples are blended in five-barrel ‘pods’ and everyone from the team receives a box of samples and rates them with a 0, 1, or 2 score. Those scores will be used to create two batches of 160 barrels each, or 16 pods, for the first Bourbon release, expected to yield 5,800 six-pack cases. It will be a traditional mashbill Bourbon with rye used as the flavoring grain: 73 per cent white corn, 10 per cent rye, and 17 per cent malted barley.

It has been a long road getting here, which can be very emotional for the team that has been through it all.

“I started consulting and working with a team in 2014, and it’s been a labor of love,” Connors says. “It’s been tough. I think that’s something that others in the industry haven’t experienced in some ways. We produce a lot of really beautiful contract distillate for people, they buy it, they bottle it. It’s great, but to experience the physical building of the site and choosing not to source, that was always something really early on, in our ethos, that we wanted to only bottle spirits we made from grain to glass onsite, which, retrospectively, is insane. The fact we were able to hold to that is a huge credit to our partners. For Will to support us in not having to source a drop when it would have been easier, it would have made more money, it would have been more lucrative, it would have helped us launch whiskey years ago, that’s a huge credit to him. That’s not a criticism on people who source – I think that if you’re honest and ethical about the way you’re talking about sourcing, there’s some brands that do some really great whiskeys that are sourced, which buy from people like us. But to have the gumption to not source is just a different monster.”

The Castle & Key team is finally facing down the day they have been dreaming of for more than six years.

“We’ve had such a strong team the entire time,” says Connors. “I like to run normally at like a 7.5 to 9.5 on the anxiety scale in my general life, and I think there’s a lot of anxiety around this as well, because this is the first time we get to showcase Bourbon from our facility in almost 50 years. A lot of the pressure is on me and Jon and the organoleptic team. We need to make sure that what we release is a fair credit to what has gone into the site. At the end of the day, we do tell great stories here, we’re good about narrative, but your final product is the way a lot of consumers will interact with the brand. All the goodwill that we’ve built up through historic preservation and restoration, through hospitality doing things the right way, through hiring and doing things the right way there, through our charitable projects that we’re working on that are pretty disruptive in the industry – we’re doing all this great work, but at the end of the day, if the Bourbon’s bad in the bottle, it’s all for naught.”

There have been many reports of eerie occurrences over the years, often attributed to Colonel Taylor. The team jokes that they’ve had one quarter of the Ghostbusters, Bill Murray, visit the site, so if things ever get too spooky they know who they’re gonna call. But in all seriousness, the team wants more than anything to release a product that would make Colonel Taylor proud.

“You’ll hear the ghost stories from many of the operators,” says Brown. “If you ask them around here, we definitely feel his presence all the time, so yeah, we could easily have a still blow up if we don’t!”

“I guess it speaks to the anxiety of it, putting something out there from a facility that is historically known for some of the best whiskey on the planet,” says Connors. “We’re not mimicking that, we’re trying to honor it. You can’t make everybody happy at the same time. That’s a big challenge where you’re going to have people who are going to love this product and you’re going to have people who don’t like it as much.”

After snafus such as pushing back the opening date, having a flood that caused millions in damage the day before opening, and all the blood, sweat and tears that went into getting to this moment, it’s finally time to welcome Castle & Key’s first Bourbon to the whiskey world.