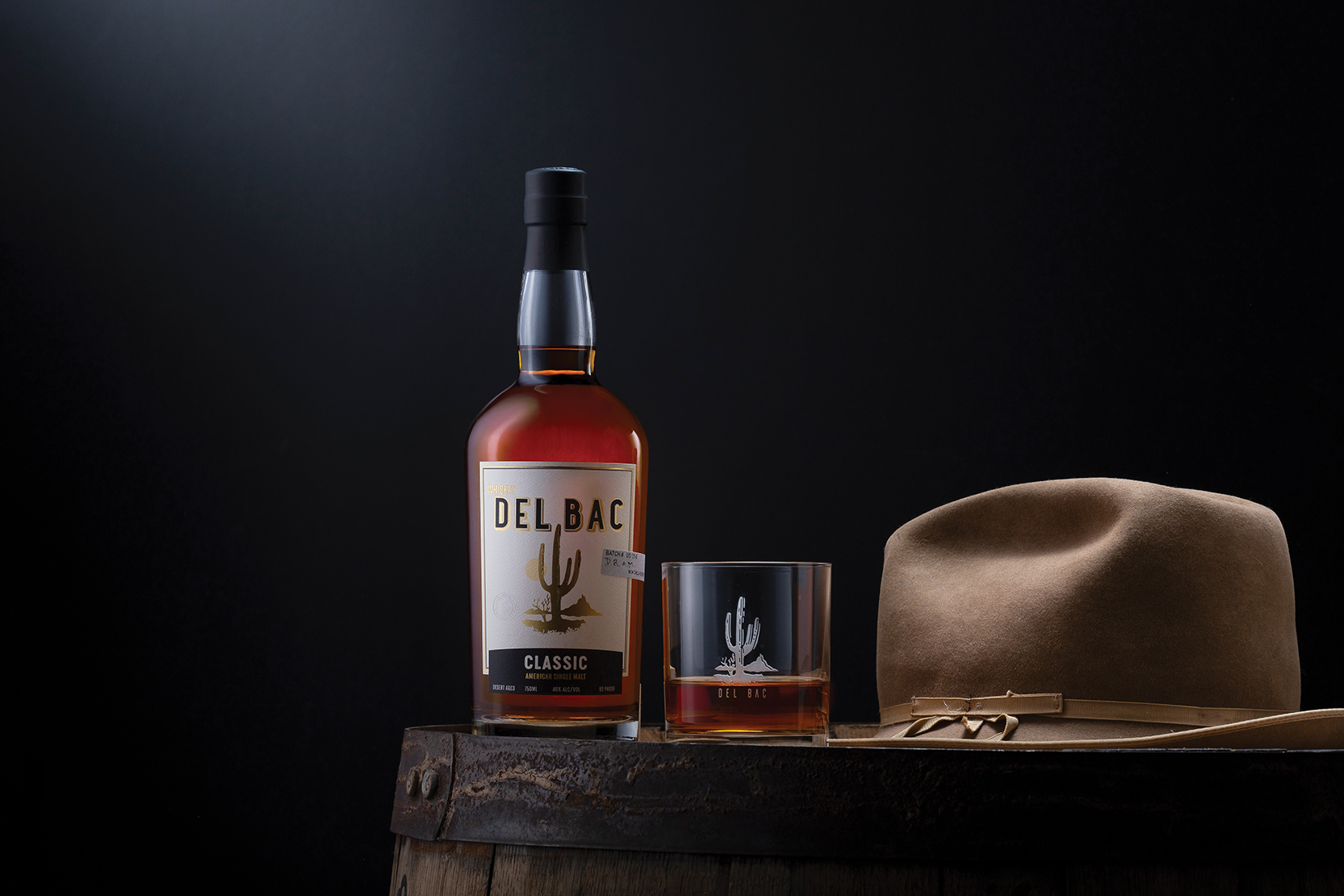 The Land of Enchantment has wooed many to its arid, colorful, and some say spiritual landscape of the Southwest portion of the United States. I myself was wooed by what seemed like a mysterious and enigmatic destination, after growing up on the East Coast of the US and criss-crossing this country several times, stopping to survey the beauty of the Mojave Desert and the soul-changing cave paintings and spectacular majesty of the Grand Canyon.

The desert can be an inspiration, and those that have found a connection to it speak of magic. So, I wondered to myself, what are distilleries in these areas producing? Are they as unique as the landscape around them? Are they similar to the hidden gems of colorful cactus flowers and glints of turquoise hidden in the pink dust?

It seems that something exciting is happening here: a new category of American whiskey is revealing itself, with pioneers creating legacies right before our eyes. As I sat down to pen this story, I realized it needed to be told by the ones out there pioneering new flavors. I wanted these folks to tell us, in their own words, what is happening in the American Southwest. I had the opportunity to speak with several brands that are releasing unique whiskey in the region, including Amanda Paul, co-founder of Whiskey Del Bac in Tuscon, Arizona.

I asked Amanda to tell me how her brand came to be: “My father, Stephen Paul, had a furniture business for many years specializing in utilizing mesquite, but in unconventional ways. One night, my parents were barbecuing at home over a mesquite fire and drinking Scotch. My mother asked, ‘Could you malt barley over mesquite instead of peat?’ My father couldn’t shake the idea, so he bought a small alembic still from Portugal in 2006, and we’ve grown from there.

“From a five-gallon still to a 40-gallon, to a 500-gallon with a full malt house, we’ve grown and evolved since that one night around the fire 16 years ago. My father and I didn’t know anything about making spirits when this journey began. He is nothing if not a perfectionist, and has always been committed to making things the best way he can, and never taking any shortcuts. Whiskey Del Bac grew out of our shared love for the desert and a passion for mastering the process, as painful and humbling as that can be.”

I asked about their intentions with their grain choices. Amanda explained, “We never considered making anything other than American single malt, so using 100 per cent barley was the only path forward. We use a two-row barley that comes from southern Colorado. The category still felt somewhat misunderstood in those early years and is still not recognized by the TTB [Alcohol and Tobacco Tax and Trade Bureau], but making a single malt rooted in the Sonoran Desert was always the priority.”

How does Amanda feel the American whiskey business has changed since they began in 2006? “The whiskey space continues to grow, and the understanding of American single malt has really expanded over the years – much to the credit of the American Single Malt Whiskey Commission… The commission has been key in elevating the public’s awareness of the category and creating the momentum we’re seeing for American single malt. I see this category growing more year-over-year.”

Back on the road, it was time to move over to Santa Fe Spirits in Santa Fe, New Mexico, where founder Colin Keegan spoke about his journey into whiskey. He left his original home of England in 1990 and spent a while in the Caribbean, where he met his wife and had a daughter. After leaving the Caribbean, they all landed in Santa Fe, New Mexico in 1992. For 15 years, Colin was working as an architect.

Colin and his wife built their home in an apple orchard in a valley four miles north of Santa Fe. “There are multiple heirloom trees over 75 years old,” he explained. “Each year, we held an apple picking for our friends. We made apple cider, which I’d ferment into hard cider. After a couple of years, I tried distilling the cider into brandy. As the economy took a downturn in 2008-2009, I put more effort into my hobby. In 2010, I bought a still and a building. As I progressed through the business plan, I realized that whiskey would be better for us than brandy.” And so began Colin’s journey into making whiskey.

My father and I didn’t know anything about making spirits…

“All the spirits are a reflection of the Southwest, where the distillery is. The Wheelers Gin is made of entirely Southwest botanicals: osha root, white desert sage, local juniper, cascade hops, [and] cholla blossom. The Atapino Liqueur is made from local piñon (pine nuts) and ponderosa pine sap with a whiskey base. The brandy is made from New Mexico and Colorado apples (Jonathon, Gala and Golden Delicious). The Colkegan whiskeys are all mesquite-smoked, which is quintessentially Southwestern.”

These spirits are incredibly unique and evoke the atmosphere of the region that Santa Fe Spirits calls home. Colin added, “Yes, we do believe the Southwest makes a difference in how we make, age, and market our spirits. In the past, we were not known for spirits, as people were looking to California and Oregon for the brandies, Kentucky for the whiskeys, and Europe for the gin. But now, because of the available technology, we can make what we want, where we want. And with the unique climate here in the high desert, we can impart different flavors and finishes.”

Then there is Big Nose Kate Western Whiskey. The brand was launched in 2021, after 18 months of Zoom calls and text messages – a truly virtual start. Mel Heim, co-founder and head of product, explained, “Big Nose Kate, the brand and the company, were born during the Covid-19 pandemic over Zoom and group texts. I had recently lost my distillery job of eight-and-a-half years and was experiencing a professional existential crisis fuelled by a no-end-in-sight lockdown and looming economic collapse… Then, I got an email forwarded from two separate colleagues about a founder opportunity. They both said they’d had it for a little while, and couldn’t think of anyone who would be a good fit until they found out about my new employment status. Those two random emails were signs that I had some unfinished business in this industry. I responded to the contact email on the deck stating I’d like to learn more, and that’s when I learned the story of our protagonist, Katherine Horony (a.k.a. Big Nose Kate). Over the next 18 months, we very thoughtfully – yet very ambitiously – grew the idea of telling Kate’s story through the medium of whiskey into a real finished product.​​”

Mel Heim was one of the first female head distillers west of the Mississippi. We discussed her journey: “I came into distilling by way of craft beer, which is the West Coast version of the tale above. I followed the crowd and dabbled in home brewing, which led me to a job doing data entry at one of the state’s largest breweries and small distilleries. Kind of like our heroine, Kate, I nosed around and asked a lot of questions of those who were doing more interesting things. The distiller told me I had a good nose upon sampling rum barrels, which meant I had another skill. From there, it was asking questions and taking notes. He eventually offered me a job in production, and after saying ‘no thank you’ three times, I finally agreed, so long as we didn’t tell anyone. This was my failsafe, in case I was terrible.

“He apprenticed me for six weeks, and left to go to law school. I was then the de-facto head rum distiller, and the company gave me a chance to prove myself. The next 14 years were dedicated to further education and experimentation. I’ve held almost every job associated with distilling. My heart is in production, though I can craft a mean spreadsheet when needed.”

When it comes to the partners in the brand, Mel said, “Our collaboration is serendipitous. Our group is a diverse blend of veteran industry nerds and spirit enthusiasts. My partners found me via shared connections, and I’ve been friends with Niki Green for years, having participated in numerous Women Who Whiskey events down the West Coast. It was an organic conversation about distilleries that got us clicking about BNK… We all share the same vision and love what we do.”

But what was it exactly that inspired the group of partners to name the whiskey Big Nose Kate? “Kate was and is an icon of the Old West, and she never got her due as a lead character in the well-documented history of the era. Everyone knows of Doc Holliday, Wyatt Earp, Ike Clanton, and every other rowdy white guy. But did you know that Kate was there for all of their exploits? We were really bothered by the notion that she was an afterthought. Her time was overdue. She’s not a superhero, but we want to give her the superhero treatment. She was a highly educated, multilingual immigrant, lover, wife, fiercely independent enterpriser, adventurer, problem-solving, take-no-shit spitfire ahead of her time. I love what’s ordinary about her and the extraordinary circumstances she faced. Her story has everything. I’m a big fan.”

We discussed grain choices, and what the intention was behind the flavor and profile of this whiskey. Mel explained, “I chose to work with grains and styles that best represent Kate’s place and time. The whiskeys and grains used follow Kate’s path from Eastern Europe to the American West. There is no corn in this whiskey. Our product has the words ‘Big Nose’ in it, so my mission was to create complexity and layers while nosing and sipping. To make matters more interesting, there is a combination of column and pot distillation between spirits. The pot distillation concentrates specific desirable notes. For example, the Crystal Chocolate and roasted rye goes through pot distillation, where deep flavors of coffee, citrus, and bitter chocolate develop. When I think of waking up in 1800s Tombstone, nothing would sound as good as a cup of dark, campfire coffee. All of these choices were made thoughtfully and intentionally to evoke a feeling, or depict a personality trait.”

I encourage you, reading this at home, to be a pioneer of your own palate. Venture out and taste what is happening in this region. Whiskey Del Bac, Santa Fe Spirits, and Big Nose Kate truly embody what I think is the true American spirit: exploration.