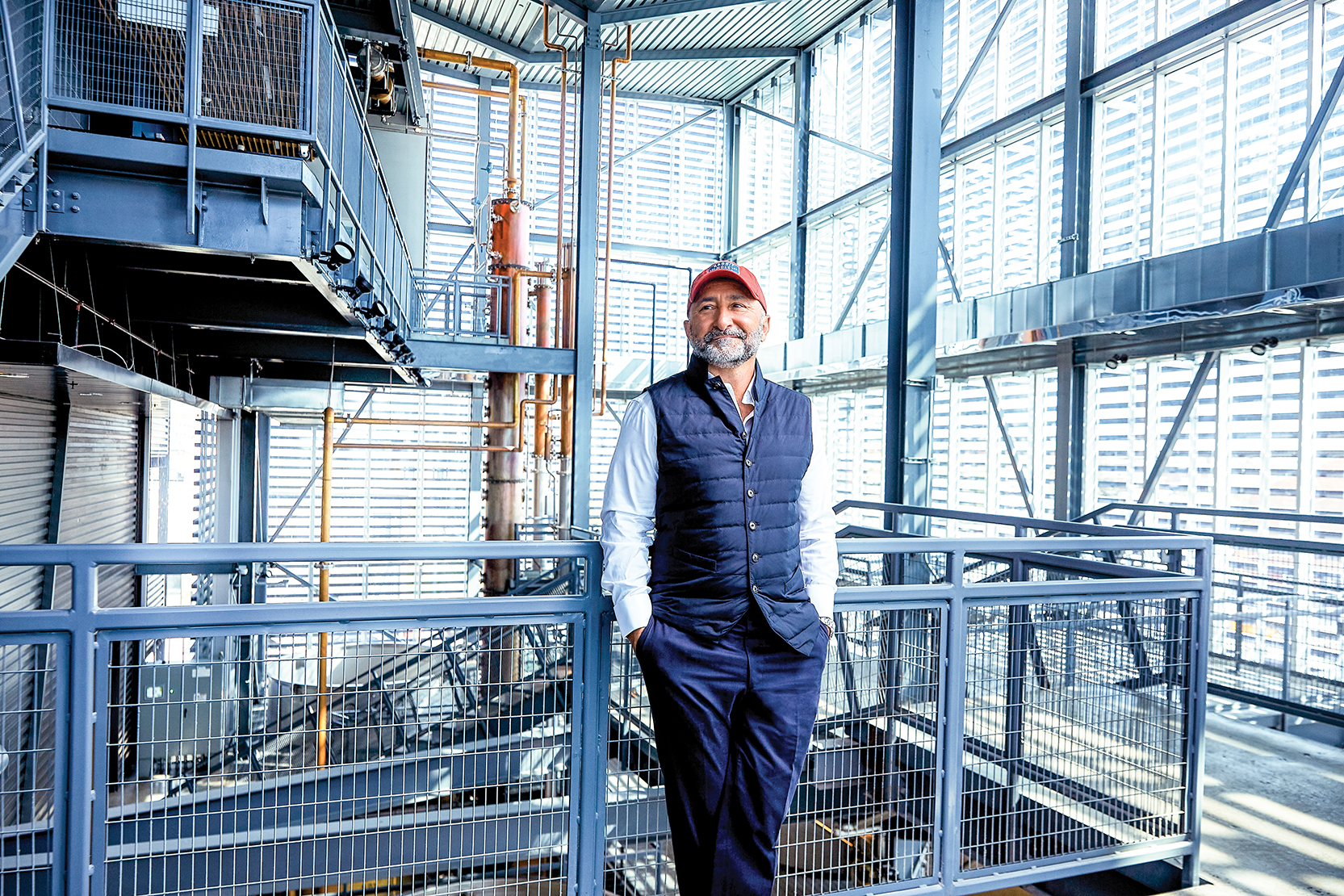 There is something about Rabbit Hole Distillery and its story that makes me think everything is going to be alright. It’s a triumph of hope and passion over reason – and speaking of triumphs, the whiskey is utterly delicious.

Rabbit Hole by name and rabbit hole by nature, this Louisville, Kentucky distillery truly offers you the opportunity to lose yourself in a full sensory experience – and that’s before you even sample the liquid. Kaveh Zamanian, founder, whiskey maker and CEO of Rabbit Hole Distillery, explains, “I think the idea was, how do you bring together the manufacturing of whiskey and hospitality under one roof and create what I consider to be a full sensory experience… all of the senses
are essentially heightened; you’re able to see, smell, [hear] the sounds, you see the distillers around… everything really in one space.”

Although the distillery is beautiful to look at in its own right, it is also in all intents and purposes a functional space that produces 27,000 barrels a year. Here, the team are perfectly combining form and function.

After recently celebrating its 10-year anniversary, Zamanian reflected on how far the distillery has come from the moment the penny dropped for him about the potential of Kentucky Bourbon.

“I started when I was really young in the hospitality business, grew up in California and saw what happened to Napa and Sonoma,” says Zamanian. “I started going to Kentucky in the early 2000s and got struck by Bourbon, the heritage and history… that was really the lightbulb moment for me and an opportunity to really contribute.”

After his keen interest became a passion, Zamanian noted that the US used to be home to a vast quantity of farmer-distillers who pretty much disappeared with Prohibition, and that with their disappearance went the rich diversity in whiskey expressions. “People were ordering by brand instead of what was in the bottle,” he continues. “So for me, what was really important was to essentially make one-of-a-kind whiskeys… I think about these expressions as truly unique in the sense that you can’t buy it, you can’t source it, you have to make it from scratch.

“What was really interesting to me was the opportunity in Bourbon. If you think about the parameters, and what constitutes Bourbon – aside from 51 per cent corn and new charred oak barrels and so on – there’s a lot of opportunity, particularly on the grain side of it, for experimentation.”

He had created the idea, and now it was time to dive down the rabbit hole and trust that it would become a reality. Of course, it was not that simple. Even a decade ago, things were very different in the whiskey industry and simply finding a financial institution in Kentucky that understood whiskey as a commodity was tough.

“This was not just about some company selling a bottle,” explains Zamanian. “It’s creating jobs… it’s becoming part of the fabric of the culture in a much more meaningful way.”

Taking his technical inspiration from the craft beer movement at the time, Zamanian began experimenting on a five-gallon still in his home. “And then I moved up to a 23-gallon still,” he laughs, as he goes on to discuss the vital members of the Kentucky Bourbon world that have supported him from the word go. When in conversation with various members of the industry in the early days of Rabbit Hole, Zamanian would throw ideas back and forth while sat around a table drinking whiskey with the aforementioned friends. From there, it all came together.

“You know, I feel like I’m more of an intuitive creative person, and I joke around with my team that I come up with these crazy ideas and the technical folks come in to make sure that it is processed in a way… to be able to scale it up and replicate on a consistent basis.

“For me, it was a lesson learned very early… not just thinking about a particular recipe that I want, but how do I put together a team around me to be able to put this whiskey together on a consistent basis. I think that’s one of the advantages of Kentucky, aside from the water, weather and so on… we have spectacular expertise there, just as I imagine people have in Ireland and Scotland.”

As the distillery has developed and come into its own over the past decade, the focus on grains used in whiskey has increased, although Zamanian says that the Rabbit Hole team is not trying to create the wheel – they just wanted to move it forward bit by bit with the creation of new and interesting expressions that play on the old standard.

“I still actually have a lot of those old samples from the early days that I kept that [were] just absolute garbage,” jokes Zamanian. “Part of it was just learning the process and part of it was really the actual process… and as you know, we have the mash bills on the bottle, but the only thing we don’t share is the cooking process.

“That process of temperature, set point and what order you actually process the grains, you know, that’s the first thing that our distillers learn and it took a long time to get to that point. And when the distillery opened up too, there were occasions where people would say… we have four or five different sensory groups and probably one of the most important sensory groups for me is the new make fresh off the still, because if it doesn’t taste right at that point because of contamination or some kind of error in the process, you’re not going to get that taste out, it doesn’t matter how much you age it.”

It’s this approach to whiskey making that has made Rabbit Hole such a success at a relatively young age; the team wanted to ensure they didn’t cut corners. If whiskey lovers are to be paying $50–60 for a bottle, then, to Rabbit Hole, it needed to be bespoke and tailored. “To me… it was more about how do you make sure that every element of your work, from the grains, to the barrels, to the bottle, that everything was high quality.”

From its work with Casknolia, the artisan cooperage based in Montilla, Spain, to its partnership with Pernod Ricard just over two and a half years ago, Rabbit Hole is very particular about sharing common understanding and goals with its partners.

“We’re not going to cut any corners just because we’re growing, expanding, and scaling. In the end, we’re still going to put the liquid in the barrel at 110 proof… we’re not going to short-change the source of grains because there might be a cheaper place to get them, you know, those kind of things.”

From the very beginning, Rabbit Hole has known what it wanted to be and what was important, and the idea of bringing people together in a combined experience was at the heart of it. When you know that, the distillery itself makes complete sense. “To me, art and architecture inspire in these really implicit ways, you don’t have to have anything in people’s face, but also for me it’s about meaning,” adds Zamanian. “You know, any experience you have, it can’t be aesthetics for the sake of aesthetics – it has to have meaning.”

With that in mind, the distillery was created to elevate art and science, and the artwork on display there is a true embodiment of its values as a company.

“One piece [of art]… that I’m really proud of is… right when Trump was running for President, I was at Art Basel, and a wonderful artist there from New York and Jeremy [Dean, the artist] and I started talking about what was happening socio-politically… and he ultimately proposed this, he basically deconstructs flags – it is a very powerful statement. And you stand back and it’s just an American flag, you get close to it, you see the intricacies and colors and textures and how they come together beautifully. When you tell people what this is about, it doesn’t matter from what background or walk of life, they relate to it.

“For us, spirits is one of the most beautiful expressions across the globe. No matter where you are, people from all over the world have had their own unique ways of making spirits, and ultimately ways of bringing people together.”

Food and spirits are a wonderful way of bringing people together and Rabbit Hole has seen that as another layer of communication.

Zamanian concludes our meeting by saying, “I tell folks [to] drink less, drink better. It’s not about getting drunk, it’s about enjoying your experience.”

0 comments on “Rabbit Hole Distillery: The Definition of Spirit”