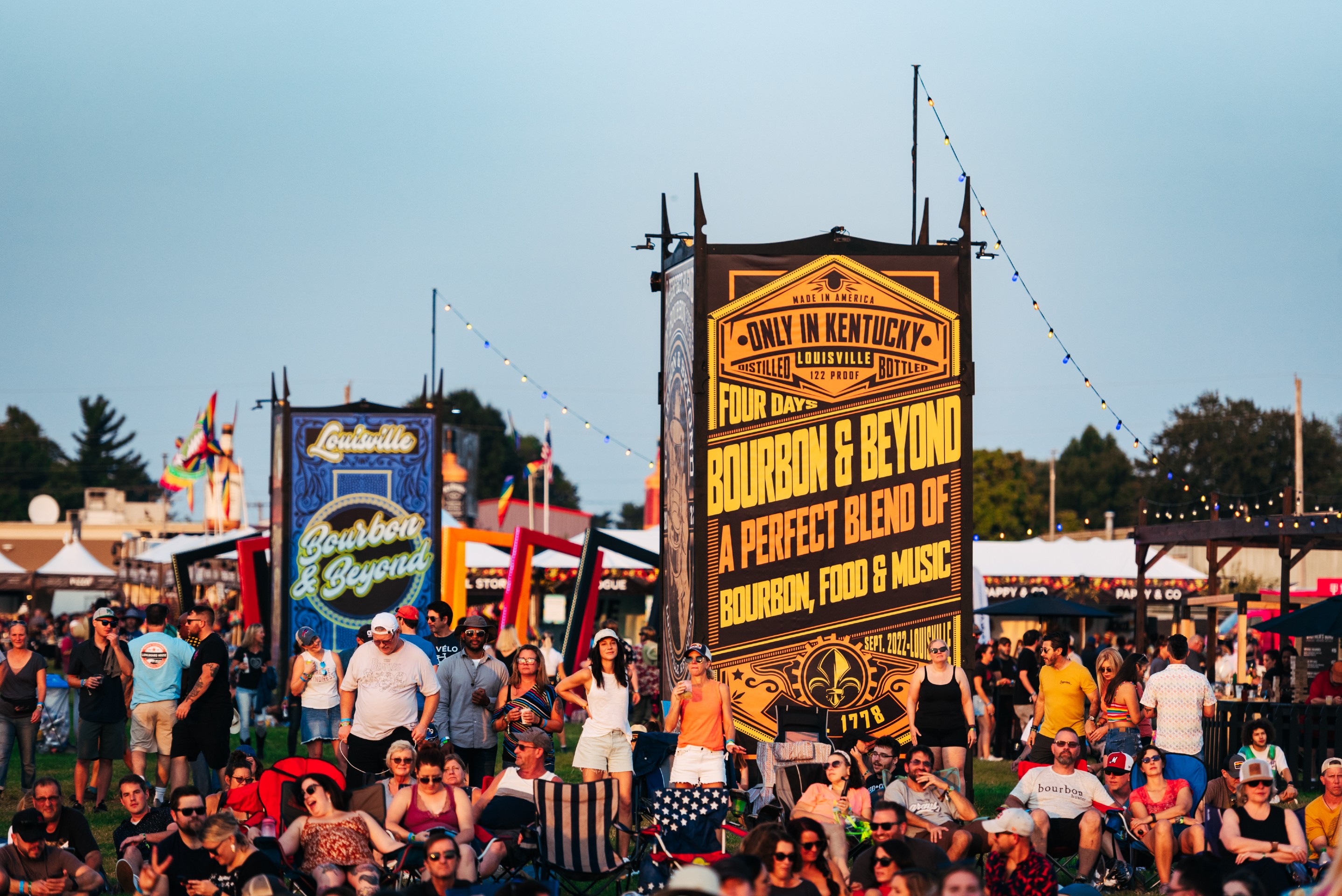 From the moment we saw the stages peeking over the trees as we made our way towards the entrance of Bourbon & Beyond, we had the feeling that this would be just a little different. The line-up was fantastic, as usual, featuring more than 60 bands/artists and was stacked with folks who had not performed in Louisville in years. Jack White and Alanis Morissette, hadn’t come to town since 2014 and 2008, respectively. Saturday headliner Pearl Jam hadn’t played the area since 1994, which is probably before the majority of the lineup was born.

The dual stage set up is one of the most guest friendly trends in years and it allows those that are there for the “Beyond” portion to set up camp and not be chasing bands all day. My friend Hannah gave me a VIP wristband for Friday and I can honestly say that the Mint VIP set up was one of the best VIP experiences I’ve had at a music festival. It was spacious but not obnoxious to the general admission folks. Everyone knows that the thing you’re actually paying for with a VIP ticket is proximity to the artists and clean bathrooms, and they provided both in spades.

From a music standpoint, Bourbon and Beyond was expertly curated and seemed to truly have a little something for everyone. But I didn’t go for the music, (except Pearl Jam… I absolutely went for Pearl Jam) I was there for the whiskey. You can keep your beyond, my good sir, and I will take the bourbon. This was an opportunity to see how some of the greatest whiskeys in the world presented themselves to 140K music fans.

The individual whiskey set ups were great, and frankly, the absolute fastest way to get a drink at the festival (remember this if you’re going next year). All the cocktails we had over the course of the weekend were all solid, but frankly, who’s really going to notice everything was a little too sweet when Greta Van Fleet is grinding in Evil Knievel jumpsuits? Not this guy.

The bourbon-based programming was excellently put together. It’s a shame it was on a side stage, but it’s understandable. It was amazing to see Kentucky royalty (like Peggy Noe Stevens, Julian Van Winkle and Rob Samuels to name a few) discussing their rise and what they’re looking forward to. Fred Minnick has created a space within a pop culture experience to highlight and promote all things bourbon, and we can’t thank him enough for doing so. There was even some cross pollination, as both the Always Sunny in Philadelphia cast and Kings of Leon seized the moment to promote their new whiskeys.

Speaking of Kentucky royalty, we had a lovely conversation with Rob Dietrich from Blackened Whiskey, who shared with us their brand-new collaboration with the great Wes Henderson, formerly of Angel’s Envy. This is something you’ll absolutely want to look out for. Beyond that, the majority of the bourbon was at the Kroger Big Bourbon Bar. Their main man Chris had a selection of barrel picks available next to the Team Kentucky Stage that were not only fantastic, but an incredible value for straight pours at a music festival.

However, one thing that should be noted is that if you looked at the marketing materials for Bourbon & Beyond, you saw a long list of some of the hardest to get a hold of whiskies anywhere. All these beauties lived in a place called the Silver Dollar Hunter’s Bar and while they were a little pricy and there was definitely a disconnect from the rest of the bourbon programming, it was certainly a way to cross some pours off your bucket list.

Bourbon & Beyond is a music festival. Do not confuse this point. The event serves as a beautiful introduction to America’s spirit to hundreds of thousands of people and regardless of them showing up for Chris Stapleton, they’re leaving with a greater appreciation and understanding of bourbon. These sorts of events help craft distilleries meet new fans and gives them seemingly endless opportunities to engage with a different crowd. The bourbon programming was unique and high profile enough to satisfy and whiskey nerd and the bourbon truly was the star of the show. And I can safely say there’s nowhere else on the planet where you can sip on a dusty Old Grand Dad and watch your favorite grunge band cover Purple Rain. Cheers to next year!

0 comments on “A weekend at Bourbon & Beyond”