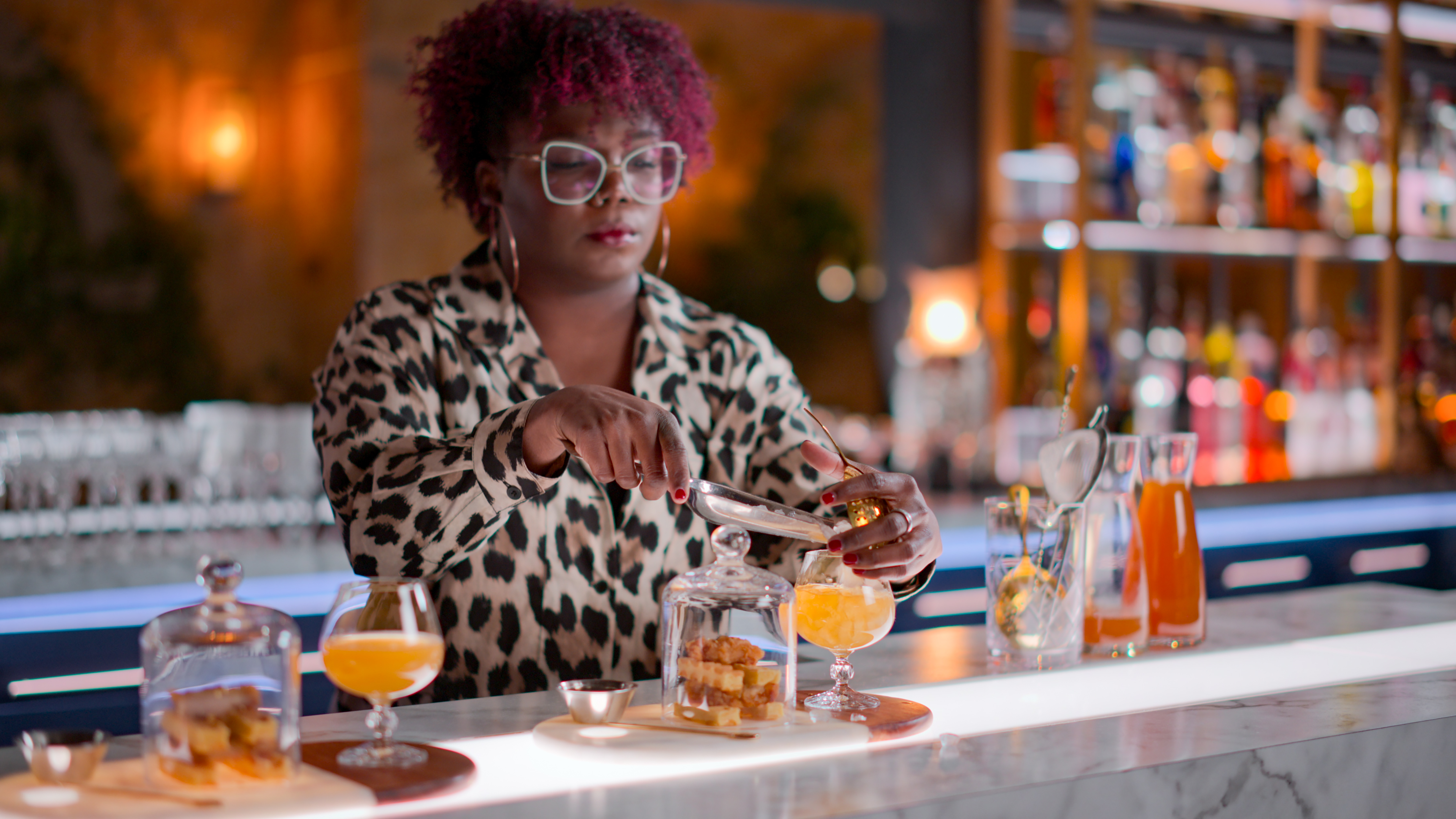 Lauren “LP” Paylor O’Brien has been crowned Netflix’s first season winner of the Drink Masters competition, a cocktail competition on steroids. Competitors were eliminated one-by-one in a surprise-challege style tournament which culminated in a final competition in which the last three competitors had to create a flight of cocktails that told a story. We recently caught up with LP, who is the owner of LP Drinks in Washington, DC as well as the co-Founder of Focus on Health.

MK: As I was watching the show, I have judged numerous cocktail competitions over the years, and one of the things that really struck me was that it seemed like everything was moving really fast on the show. What was the pace like off camera?

LP: Yeah, everything certainly was moving quite fast. Everything you’re seeing on the screen definitely is translating to what’s happening behind the scenes. We were given pretty minimal time to prepare for each challenge. We really had to rely on all of the studying that we did off camera and just the preparation that we’ve respectively prepared for ourselves. But yeah, it was certainly a little bit of a stressful experience. And I’m pretty proud of the end result.

MK: Do you feel that having a kitchen background gave you an advantage in this competition?

LP: Yeah, you know, having worked in the back of house for the Silver Lyan program certainly worked to my advantage. I feel that there certainly were a lot of things I did not know prior to going into the competition. So leading up to competing in Drink Masters, I really did my due diligence working with my savory and pastry chef to learn new techniques.

MK: What were some of the most challenging aspects of this competition?

LP: I think it’s not knowing what the challenges are going to be ahead of time. I went in not thinking I’m going to win. It was like, how can I ensure that I do the best that I can for each challenge? It was never really, you know, am I going to put up a good serve, or is my cocktail serve going to be better than everyone else’s? Because that’s how they judge. It really was focused on is everything I’m doing aligned with what my overall goal is? And my overall goal was to always showcase myself in a way that was very authentic to me.

MK: You put a lot of thought into the messages behind your cocktails. And I know that that a lot of that didn’t come across in the show, because of the time constraints. But tell me more about the messages and the thought that you put in to those cocktails.

LP: I think this was a really amazing opportunity for the beverage industry to highlight some of the elements that are a bit more nuanced and complex when it comes to drinks. I really tried my best to tell stories that could provide everyone watching with an opportunity to learn a little bit more about the drinks, about drink culture, about the ingredients that we put into the glass. For instance, the margarita cocktail I did in the first round. My message in making a syrup that had no agave was to really put attention on the way that agave nectar is advertised. It’s advertised as a byproduct of agave distillation, which it is. However, in order to keep up with the demand that is required to sell as much as being sold, they do have to unfortunately prematurely harvest agave plants, which as a result really impacts the biodiversity of everything related to agave. So with that cocktail, I made a syrup that had all of the elements of agave nectar or syrup in them without using agave.

MK: You have a personal focus on health and inclusiveness. Tell me about that.

MK: Getting back to the competition itself, one of the other things that I noticed is you don’t usually do that many competitions back to back. I’m sure these were all taped in a very short period of time. Did you have any issues with stamina?

LP: It was one of the most difficult things I’ve done in my career. I will say that I really did focus on preparing as much as possible. That certainly allowed me to be successful. I was proud of every single thing that I put up and truth be told, I think it speaks a lot to how hard work and focus and determination can really make you successful.

MK: My next question is actually from my husband because he watched the show with me and he said, you know what, that kitchen pantry seems like magic. So did you get to request specific ingredients or were they already there? How did that work?

LP: The way the pantry was set up is that they certainly had many, many, many ingredients and equipment and tools that we had access to. We were placed in a position where we utilized whatever was in the pantry. During that final challenge for the finale, we did have the option to request some items, but again, really the whole goal was to challenge us.

MK: I want to switch gears and talk about whiskey because you know, this is American Whiskey Magazine. Do you have a favorite whiskey cocktail?

LP: Oh my gosh, I love it. So this is a little unconventional, but I actually am a huge, huge, huge fan and advocate of Siponey, which is a whiskey-based canned cocktail. It has honey, lemon, rye whiskey, and carbonation from soda. One of the things I love so much about their message and their mission is that it is very intentional. It’s very focused on the environment and it’s also very focused on being a product that allows consumers to be a bit more educated and informed. Consumers have so much power in what they choose to consume. And I think that message really is conveyed beautifully with that product.

MK: And when you’re using whiskey in cocktails that you’re making yourself, is there a particular favorite way that you like to do that?

LP: I love to use Belle Meade in old fashioned. The old fashioned is my favorite whiskey cocktail. You can appreciate from it in so many ways. It’s a really great cocktail for folks to make at home and to experiment with different syrups, manipulating with spirit with a fat wash or just going classic two ounce spirit, quarter ounce simple syrup, and two dashes of bitters. Delicious.

MK: That kind of plays into my next question. You kind of covered a little bit of it. Do you have advice for home bartenders to elevate their cocktail game?

LP: Yeah, you know, stick to the classics. Try your best to learn as many of them as you can. There are so many amazing books and just resources online that you can reference to get those specs or ratios and I advise swapping out one ingredient or one element or one item at a time just to see what you like and dislike about that change and then really figuring out flavor profiles that are complimentary or contrasting that work in your favor with doing this research development in your home.

MK: And final question. How did it feel when you won?

LP: It was such a great feeling. Truth be told, it wasn’t until I watched the entire series a couple of weeks ago that I had all of the memories and the emotions really came flooding back and it really wasn’t until a couple of weeks ago that I truly felt like I won. The messages that I’ve been getting online have been so encouraging, so supportive, so beautiful and I’m really just excited and happy that I got to experience this with all of the competitors. And truth be told, I’m not the only winner. Everyone on that show won because they did a beautiful job respectively at displaying all of the nuanced elements of being in the bartending world and yeah, I’m really proud of each and every one of them.