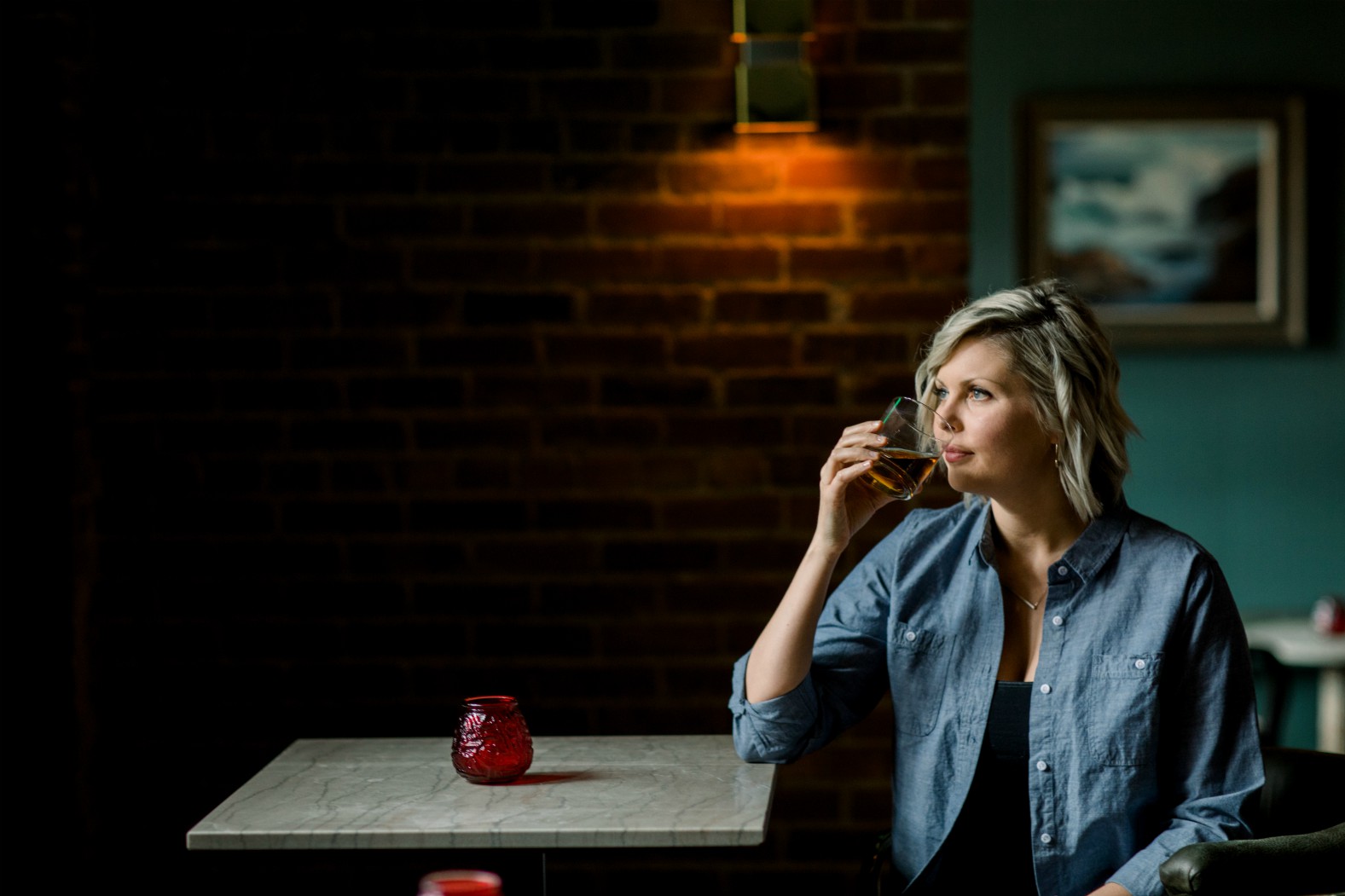 Stepping out into the unknown never felt so good…

It has to be said that as years go, this one has been filled with uncertainty and surprises. However, for Marianne Eaves, one thing in 2020 was certain: it would be the year that she became a mother.

“On March thirteenth my baby girl was born… I probably would have been locked in the house doing nothing but holding her for the first month anyway, so the lockdown at least gave me a good reason to stay inside and just cuddle my newborn,” explains Marianne.

Fast forward five months and not only is Marianne hitting her stride as a mother, but also in her consulting business. Earlier this year, American Whiskey Magazine caught up with the former Castle & Key master blender as she stepped out into the world of whiskey consultancy. Marianne adds, “I’ve lived in three states and launched a Tennessee Bourbon brand since the pandemic started; now I’m looking forward to really kicking back into gear and making some exciting projects in spirits happen.”

Having spent her formative years in the industry at one of Kentucky’s biggest whiskey giants, Brown-Forman, as a master taster, Marianne understands what it is to create a product with staying power and authenticity. In taking that knowledge forward to this next phase of her career, now is the time to focus on her own brand.

When asked about how the birth of baby Andi has changed her viewpoint on the state of the world and her future, Marianne explains, “Having Andi has made me think even more long term about making a lasting legacy and providing for her, kicking down doors for her and setting an example that she will be proud of.”

So, what was the final push that encouraged her to become a consultant in a world built upon brand legacies and history?

“I had the realization that I would only be able to make my hopes and dreams a reality if I had the reins,” she explains. “Meaning that working for someone else, another company, would never satisfy the desire in me to impact global spirits and to build my own empire.”

By moving away from the more regimented career of her past, the future is bright and full of endless opportunity for a person with such entrepreneurial spirit. Of course, the change hasn’t come without challenges and spinning many plates has meant a change of pace.

“Minding the baby while talking to Zoom chat rooms full of influential spirits and hospitality industry professionals about various projects is a lot of juggling,” adds Marianne. “Mostly what I find myself doing these days is evaluating whiskey, fielding emails, doing research or talking to my lawyer about world domination. Some days it is all of the above! Hopefully sooner than later I can find a rhythm in this consultant-mom life and begin to create more of a structure in the way I do work.”

After many years spent working for brands with the immense weight of history on their shoulders, this career move has allowed Marianne to shape her own perception of what it takes to create a truly iconic whiskey. Even the seemingly simple act of getting out of Kentucky for a few days at a time began to make a difference, particularly when Marianne’s schedule at Castle & Key could often total up to 80 hours per week.

“Being open to meeting and rubbing elbows with producers all over the US has completely changed my view of what’s possible,” adds Marianne. “I was very much in the same camp with all Kentucky producers that 95 per cent of the nation’s Bourbon is produced there, and that the best Bourbon is produced in KY.

“Well, I’ve come to find out there are really wonderful whiskeys and Bourbons made all across the US. It opened my eyes to processes and profiles that are unique to each of the varying regions in our country and that I had a lot more to learn, but also a whole lot more to contribute.”

Although heading across state lines and into distilleries isn’t quite as simple as it was this time last year, Marianne is as determined as ever to discover the brands that are bringing forth the best ingenuity and liquid in the business.

Living with a partner in the circus business means that there is an abundance of new locations to explore, and with each new location comes the trips to local distilleries.

Marianne continues, “Sometimes the word will get out that I’m in a certain place and folks will reach out to me with recommendations as well. I’ve been to many new places I probably wouldn’t have ever paid attention to as long as I stayed in my comfy Kentucky bubble. A couple that stick out are King County in New York and Woodinville in Washington. Really great spirits and thoughtful producers.”

The experiences of the past year have encouraged changes to the way Marianne approaches her workload, as she explains, “I listen more, before I probably would have wanted to roll my eyes at the way some of these smaller craft producers start making their whiskey. But, after making relationships and taking the time to understand their processes, I am learning that there’s more than just the KY way in making really wonderful whiskey.”

This approach is ensuring she is able to forge ahead with new working relationships, one of which is her latest project on Sweetens Cove Whiskey. Marianne explains, “I’m not sure now exactly how I first got in touch with the gentleman at Sweetens Cove, all I know is that they had purchased some really great product and they needed someone to blend it for them. In their search for a blender, I was recommended to them by a formidable production facility in Tennessee, so they reached out.

“After hearing about the beautiful historic golf course they saved and their vision for the spirits brand, I was sold. I was born in Tennessee, so I was happy to help this team raise the bar in the state’s whiskey.”

On the subject of the process of creating the spirit itself, Marianne continues, “The whiskey had already been purchased, so I got straight to work on tasting and creating the batches. My process is very in depth and unusual, most producers don’t go anywhere near this extent to create their batches.”

One of the most important aspects of Marianne’s working process is the fact that she will taste every single barrel, a time-consuming commitment to in-depth analysis that is a rarely seen in the whiskey industry. In doing this, Marianne ensures that she has

more than just a base understanding of the broad flavor notes that are generally present across the entire stock, but can also spot both unbalanced spirit in need of special treatment and ‘superstar’ barrels that would serve better as single-barrel releases or special editions. After that part of the process was complete, the team were left with 95 barrels that would be batched together to create some truly unique flavors.

Marianne adds, “Using the notes from my tasting process I start to pair barrels together in groups of less than five and taste again. Then I begin to layer more flavors in and eventually end up with five batches of 21 barrels or less. It takes a long time, while fighting palate fatigue, but it’s always very interesting and fun.”

The future looks bright for Sweetens Cove, and Marianne uncovers a little teaser for fans to look forward to, “The best thing about my partnership with Sweetens Cove is their commitment to quality and thoughtfulness, so as I work on next year’s release they have embraced an innovative idea I have that has never been presented to the American market before! It’s a really cool story, and another delicious product to add to their portfolio.”

Although whiskey projects are at the forefront of Marianne’s mind, she is also looking into opportunities that allow more women to work and collaborate with her on the new endeavours that are coming her way.

She explains, “I want to lift other women up and hopefully provide a little bit of a runway to get more women rising up the ranks in the spirits world. I am currently looking at helping to build a female-led distillery that complements my partnership with Hoopes Vineyard, under the amazing Lindsay Hoopes in Oakville California, making brandy, gin and vermouth.

“I am also embarking on a partnership with a Tennessee based chef to create a culinary driven line of spirits, looking to start mainstream and then go into more unique, boutique global spirits. This project really gets behind the idea that tradition is important, but flavor is more important. I’m so excited to share more as things continue to develop.”