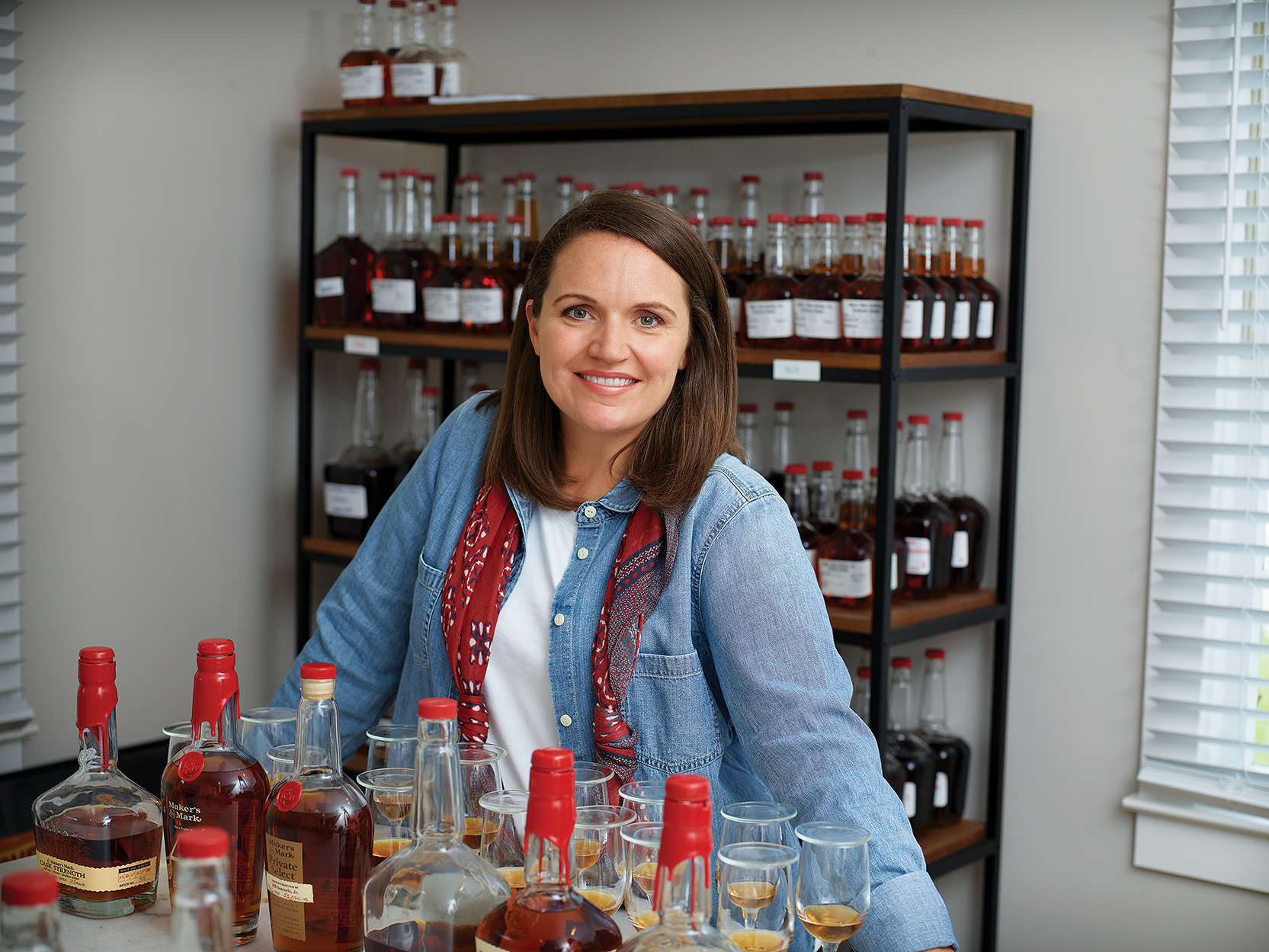 Even though Jane Bowie, director of innovation at Maker’s Mark, was born in and grew up in Kentucky, that did not mean that a career for her in Bourbon was pre-determined. “I grew up in Monticello, Kentucky in dry county,” recalls Bowie. “It was a town of 5,000 and all the people you knew with successful jobs were lawyers, doctors, bankers or teachers.”

Indeed, Bowie’s parents were in that group. Her mother a teacher and her father a banker. “And drinking was very taboo. I never saw my parents drink a drop of alcohol. There was church three times a week.”

When Bowie left her eastern Kentucky home for college, she went to Transylvania University in Lexington and even though she’s of average height, she had a basketball scholarship. “If you are tenacious enough, you don’t have to be tall,” she says with a grin.

That tenacity served her well, both to pursue study abroad (Great Britain and then Japan, where ironically, she discovered premium Bourbon) and when she decided to switch her college major from marketing and accounting to a new degree being offered at Transylvania in hospitality and tourism. In a bit of foreshadowing, that course of study included a field trip to Maker’s Mark.

After college, she landed in Louisville where her parents had moved, working at the historic Seelbach Hotel with the goal of saving money in order to move to New Zealand and be a white water rafting guide.

“I can hardly say that with a straight face now. And I was living at home because I didn’t have any money.”

As it happened, it was her abstemious mother who her encouraged her to go after a Bourbon job. “I woke up one morning and my mom had cut out an ad from the Louisville Courier-Journal for a job at Maker’s Mark and said, ‘This is what you need to do.’”

But Bowie wasn’t keen on the idea. “My plan, such as it was, was to spend my twenties being selfish and traveling and when I turned 30, I’d get a career. My life would magically fall into place.”

Reluctantly (“to appease my mom”) she wrote a cover letter for the job as an event coordinator. A week after the application deadline, she dropped off her resumé. In the letter she stated right at the beginning that she frankly wasn’t interested in the position. Rob Samuels (currently chief distillery officer and son of Maker’s Mark chairman emeritus Bill Samuels, Jr.) called and offered her a job anyway. But not the one advertised.

That was in 2007 and Samuels, who had joined the company in sales and marketing, had decided that Bowie was the perfect person to represent Maker’s
Mark internationally.

She remembered, “Rob’s whole thing was that he wanted to send a person from the distillery that would set up shop in a new country, train the distributor, train the sales team, to talk to bars and get the brand promoted to customers. That first year I worked in nine different countries.”

Bowie was based in London and acted as the Maker’s Mark brand ambassador in Europe for the next four years. She was not only introducing the brand, she had to convince whiskey drinkers to try Bourbon as a category. “You were selling a drink at a time that all people knew about American whiskey was Jack Daniels.”

By 2011 the Bourbon market in the US had grown exponentially and there wasn’t enough Maker’s for export. Her job in London wasn’t needed, so she returned to Kentucky. Having learned as much as possible about the production side of Bourbon making from master distillers connected to Maker’s over the years, including the late Dave Pickerell, Kevin Smith, and Denny Potter, she felt she wanted to be in on the process, but the actual distillation wasn’t all that interesting to her since the chemistry of the process is pretty straightforward.

Bowie became intrigued by what happened to Bourbon once the distillers had finished making it, in what she refers to as “where the art comes in”. That’s barrel ageing and the possibilities that exist by varying ageing time, proofing, and secondary finishing.

So, after helping run the private barrel selection program for a while, Bowie became director of innovation. To anyone with a knowledge of the storied Bourbon brand’s history that might seem more than a little paradoxical. After all, for more than half a century after Maker’s first arrived on store and bar shelves in 1958, the distillery produced only one expression of its wheated Bourbon in the iconic red wax-sealed bottles.

As the Bourbon market started taking off in the late 1990s and early 2000s and other Kentucky distilleries expanded their portfolios, Maker’s stuck to its proven product. Why change?

But, as he neared retirement, company chairman Bill Samuels, Jr. decided he wanted to leave his mark on Maker’s. So, he gave the coopers at Independent Stave the task of developing some specially toasted staves that could be used to finish some of his Bourbon with secondary ageing. After much experimentation, Maker’s 46, the company’s first “new” product, debuted in 2010.

Today the flagship expression and Maker’s 46 have been joined by a limited-release Wood Finishing Series that Bowie heads. Hundreds of private barrel selections are made by retailers, bars, and Bourbon appreciation clubs. Those private selections rely on finishing with 10 staves of four different French and American oak with customized toastings. That means there are 1,001 possible combinations.

Bowie promises that more Maker’s expressions are in the pipeline, but she was not at liberty to give details at the time. Meanwhile, it’s fitting that the company she works for that is currently headed by the grandson of its founder has become a family affair for her, too.

Her husband Alex, who she met while working in London, now works at the distillery. Their four-year-old daughter often joins them on-site. “She has her own golf cart [for getting around the property.]”

Reflecting on her 14 years at Maker’s Mark, from that initial phone call, to time in London and meeting her husband, to Alex subsequently joining the company and her current role, Bowie sums up that trajectory with a big smile, “Rob Samuels is responsible for my whole life.”

0 comments on “A Life Unexpected”