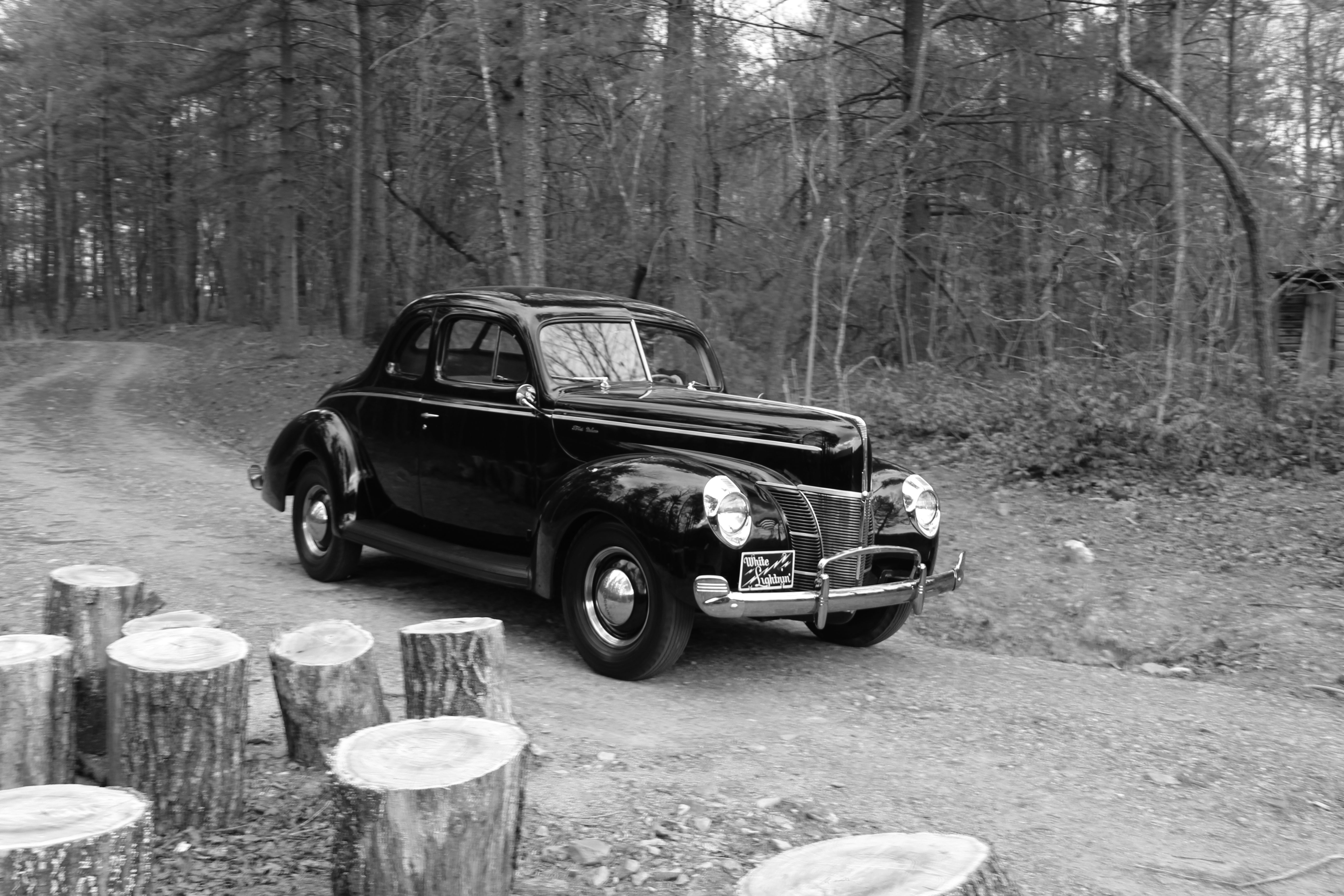 Ancient Oak Road, Wilkesboro NC – a North Carolina State Police cruiser swings round bend on the two-lane highways heading toward us. We blast past in the opposite way.

No sense him even thinking of giving chase, I’m riding with Brian Call whose driving a 1961 Dodge, leading three original “liquor cars”.

We are zooming past the abandoned Wilkesboro Speedway track, where stock car racing was born, then down the real “Thunder Road” again shaking to the roar of liquor cars blasting in days from a vanished but not so distant past.

Moonshine legend Willie Clay Call taught his 12 year old son Brian how to drive a moonshine car, and teach him well he did.

In a scene straight out of Robert Mitchum’s classic movie Thunder Road, we relive old time moonshine whiskey runner days. On our tail, a 1940 Ford and baby blue ‘61Chrysler New Yorker try keep up while wide-eyed motorists take a second look, thinking themselves back in the Twilight Zone…

Never in recent history have real liquor cars been seen out of static display in dusty museums – except when American Whiskey Magazine comes to town.

Sidekick George Smith (we ride motorcycles and fly biplanes a lot) rides in the sleek Chrysler, its massive 413ci “wedge” with two four barrel carbs… throbbing with power, aching once more to show its stuff, rattling windows with her snarling twin exhausts.

George says, “Whereas the 1940s Fords seemed to be something that could be made into the best tool for the job in its day; the Chrysler, like Willie Call’s example, accomplished the task with brute force.

Where today they are regarded with a mixture of awe and reverence, to moonshine drivers, they were merely delivery vehicles, although they were by necessity, faster and better handling than the vehicles trying to prevent them from completing their task. But the ‘shiners had an inherent disadvantage to overcome: a heavy, liquid cargo to deliver.  I think the real difference was the sheer talent, daring of devil may care drivers, guys like Willie Clay, Junior Johnson and others.

All this in the raucous days before seat belts, disc brakes, air bags…and police radar!

We take corners at a sporty clip as Brian tells me, “Back when I was a teenager, a girlfriend was riding with me in one of my daddy’s liquor cars. Anyways, as another guy passes us, she says to me ‘Brian, you gonna let him pass you?’

“In a real-life scene from American Graffiti I dropped her into second gear, and hit the gas. We screamed down this road like a bolt of lightning, passed him doing 120 mile an’ hour…white in the face she said she would never say that to me again.”

Back in the early ‘60s American drivers, especially the younger set, kept an eye on what was happening on the race tracks.

Plymouth, with their big factor V-8 and hemi motors were winning time after time. So my pals and I, too, ordered new Plymouths on news of the brand’s big wins at Daytona and elsewhere.

My dreamboat was a 1964 Plymouth Sport Fury convertibles, red body, white top with black leather interior. Fancying myself a hot driver I opted to forego power steering and had Detroit fit it with a four-speed Hurst stick shift and powerful 383ci Golden Commando engine.

Others opted for Belvedere hard tops, same engine, but they had the sense to go for automatic transmissions and power steering – should have, too!

Willie Clay’s liquor cars were a whole other game. His pal Junior Johnson helped tune a few, so you know his cars were nothing to be trifled with, as the law was fully aware.

Extra heavy suspension modifications made these cars look level and sedately normal, even when loaded with whisky jars.

Despite their value and rarity Brian had no hesitation swinging off the paved road; unlocking a chained dirt driveway, then trundling the three treasures over a long climbing bumpy dirt track pretending to be a road. We’re headed for his 70 acre farm and hunting cabin perched high atop densely wooded hills…these cars were made for this kind of work.

A gaggle of hen pheasants flapped and fluttered as we rolled past an Alpine pasture. “I keep Angus cattle up here in the summer,” he replies to my question if he farms here.

We pull up to his hunting cabin and assorted barns, sheds and an old outhouse – this is the country!

Here, there, everywhere are rusting liquor cars, mostly 1960s Chryslers, a 1930s fire truck, barrel hoops and the like.

“Want to see where we had a still?” he asks. We all get into the Chrysler. These are BIG cars, lots of room, and in minutes we are heading down a track designed for four wheelers, the springs creaking, swaying, some of the track precariously tumbling down hill side where a wash out would see us fall hundreds of feet, but Brian knows these tracks. His car knows what’s expected of it.

At last we reach a clearing deep the woods, where a clear stream gurgles from a makeshift dam. “Folks say there’s been gold found in this stream!” He says as we follow him into a thicket of leafy myrtle to where the remains of an old Call whiskey still lie rusting in the shade. More barrel hoops lie tangled in the undergrowth; this sure was a busy still back in the day! Small wonder revenue agents could hardly ever find such a giveaway.

We take a ladle and taste the water; pure, cool, deliciously refreshing, just the job for making white liquor.

The 78 year old Ford battery gave out. George hefted his shoulder to the rear, gave it might push as Brian bump-started it back to life, reluctantly we headed back the Call Family Distillery a blaze of nostalgic glory.

Truth be told, old time revenue agents and moonshiners played a cat and mouse game, each having guarded respect for the other side. Rarely in these parts were shootouts part of the game. When agents made a bust they’d usually destroy the still, send the moonshiner on home to put his affairs in order, telling them to be at courthouse on such and such a day, and the moonshine did just that.

“I’ve often been asked if my daddy liked making whiskey after it became legal” Brian confides. “To some extent he did, not having to look over his shoulder all the time. But the sport of making clandestine whiskey was gone, it was never as much fun after that.”

0 comments on “Ghosts of Thunder Road”