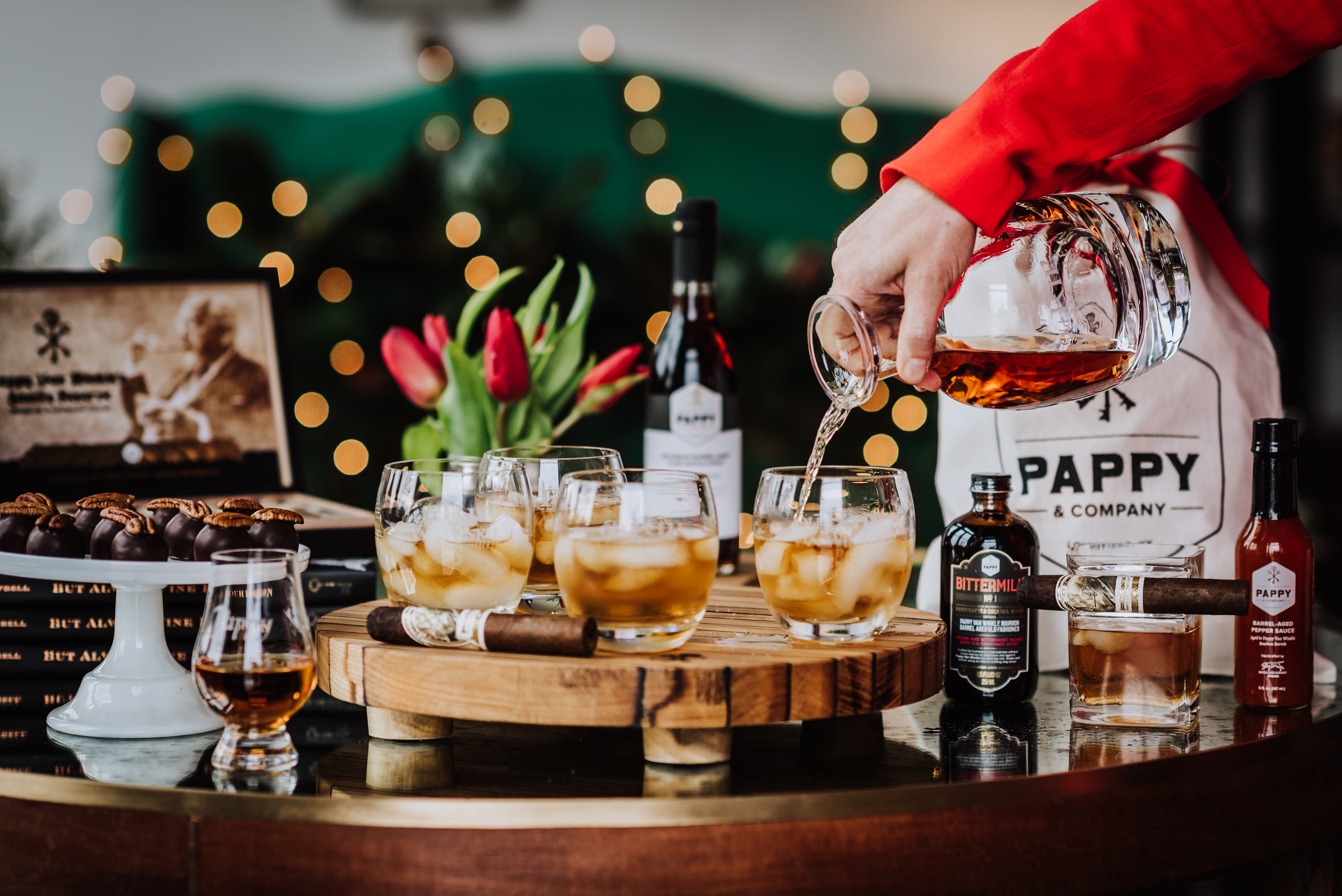 How the fourth generation of the Van Winkle family is carrying on the tradition.

The Van Winkle family has a long history in the bourbon industry, starting in the late 1800s. Julian Van Winkle, Sr., known colloquially today as “Pappy,” was a real person who started at the bottom and worked until he had an empire to leave his family. Unfortunately after his death some of the stockholders in his company forced his family to sell the family business, but this only strengthened the family’s resolve to work to make the family patriarch proud. Julian Van Winkle III, Pappy’s grandson, kept the family business going during some of the most difficult years of the bourbon industry, and today his children have joined in the family businesses each in their own way. While his son, Preston, works on the whiskey side of things, his daughters, Louise, Carrie, and Chenault, have started Pappy & Co., a merchandise company that pays homage to the family brand.

The history of this family brand is a legend in itself. According to Buffalo Trace:

The Old Rip Van Winkle Distillery has a four-generation history. The Van Winkle family’s involvement in the bourbon industry began in the late 1800s with Julian P. “Pappy” Van Winkle, Sr. He was a traveling salesman for the W.L. Weller and Sons wholesale house in Louisville. Pappy and a friend, Alex Farnsley, eventually bought the wholesale house and also partnered with Mr. A.Ph. Stitzel on the purchase of Mr. Stitzel’s distillery. The three of them merged the two companies and became the Stitzel-Weller Distillery.

In May of 1935 at the age of 61, Pappy opened the newly completed Stitzel-Weller Distillery in South Louisville. Its prominent brands were W.L. Weller, Old Fitzgerald, Rebel Yell, and Cabin Still.  Pappy had a heavy influence on the operations there until his death at the age of 91. His son, Julian, Jr. took over operations until he was forced by stockholders to sell the distillery in 1972. The rights to all of their brands were sold to Norton Simon, Inc. Later, United Distillers, who eventually ended up with the Stitzel-Weller Distillery, sold off all of the original labels around 1999.

After selling the distillery, Julian Jr. resurrected a pre-Prohibition label, the only one to which the Van Winkles kept the rights, called Old Rip Van Winkle. He used whiskey stocks from the old distillery to supply his brand. Julian Jr.’s son, Julian, III took over in 1981 when Julian, Jr. passed away. Julian III has continued with the Van Winkle tradition of producing high-quality wheated bourbon. His son, Preston, joined the company in 2001 and the Van Winkles look to continue that tradition for generations to come.

In the years since Julian Van Winkle III’s triplet daughters have started their own branch of the family business. Pappy & Co. is a retail outlet for all things Pappy, from needlepoint belts to cigars and humidors to barware and more.

“Our brother had had a few Old Rip Van Winkle branded pieces made back in the day,” says Carrie Greener. “A sweatshirt and a trucker hat that a few friends and family were lucky enough to own. People would constantly ask for one, and we’d just have to say Preston had these made but we don’t have any more. Then somehow our sister Chenault ended up selling one of the sweatshirts on eBay and it immediately sold for $50! About seven years ago now, we three sisters decided we should start a business. The brand had taken off well before then, and it seemed only natural to create a line of merchandise associated with such a famous bourbon brand. Because the bourbon is so hard to find, we also thought it would be a great way to offer fans something from our brand that they can appreciate and use and wear with pride. We started with well-made basics, like branded hats and t-shirts and some barware, and then naturally evolved into a lifestyle brand from there, offering high-quality products that fit our lives. We’ve grown our brand by making and selling things that we use, or wear or want in our lives, inspired by our family’s bourbon heritage and traditions.”

The brand may have started with hats and a sweatshirt sold on eBay, but it evolved into something that had great meaning to the family.

“Most of our products have a story behind them and relate to our family’s heritage of quality over quantity,” Greener says. “It was never taught to us, but because it’s all we know, as adults we realize we are carrying on and doing what our dad, grandfather, and great grandfather Pappy did in business. When you stay true to who you are and your product, the reward will come, and it will be appreciated and respected. There are a lot of products that have a family connection. We grew up using silver julep cups collected over the last 3 generations of Van Winkles. They are a collection from past birthdays, christenings, anniversary dates, our grandfather’s hole in one prize, and things like that. So it was natural to offer special julep cups that our customers can buy as heirloom pieces just like our family’s collection has become for us. We offer several styles, but the most special are these Wilson Julep Cups, handmade locally, or this Asa Blanchard Barrel Beaker, which I know Pappy would have admired. Another one, our Bourbon Balls, are made with Old Rip Van Winkle 10 Year bourbon. They are much prettier than those we used to make growing up, but we made sure we kept them “homemade” and just as good or better than what we remember enjoying during the holidays.”

“Our barrel-aged food products are some of our best sellers: everything from the barrel-aged pepper sauce that our friend in Georgia makes with ghost peppers grown on his farm, to our bourbon barrel-aged bourbon nib brittle. Our barrel-aged pure maple syrup is definitely a favorite and the most versatile. We grew up using real maple syrup on our pancakes and waffles. We were definitely spoiled by it, and have passed this on to our own children. They won’t eat Aunt Jemima! In terms of making products that come naturally to us, the syrup is definitely at the top of the list. We feel so lucky to have partnered with such a high-quality maple farm. We work hard to know where our products come from, and together with our makers are able to offer our customers a product that they can’t find anywhere else, and with incomparable quality. Because we have access to some of the best whiskey barrels in the world, combined with high quality, small-batch maple syrup, we have the best barrel-aged maple syrup you’ll ever taste.”

By far one of the most impressive products is the Pappy Van Winkle Barrel Fermented Cigars, which are made by Drew Estate in Nicaragua.

“Our cigars are our best selling product,” Greener says. “As the trend goes, they were a natural product for us to create, note Pappy smoking a cigar on the famous bourbon labels. He loved cigars, but from what we’ve gathered, he was not picky about what he smoked, just as long as they were good. Like his bourbon, he didn’t take himself too seriously, he just wanted to make a quality product that he believed in. We are thankful to have found Drew Estate and built our partnership working with its founder, Jonathan Drew, who is known for his innovative blends, making him a leader in the premium cigar industry. JD created our blend to pair well with bourbon. What makes it so special is the wrapper is Kentucky fire-cured tobacco. (Grown in Hopkinsville and fire-cured in a barn). It’s then shipped to St. James Parish, Louisiana where it is fermented in our bourbon barrels under several tons of pressure. This is called Perique processed tobacco. This part of the blend is what makes it unlike any cigar on the market and gives its distinct flavor profile.”

The thoughtfulness with which every product is created is a testament to the Van Winkle family’s commitment not only to quality, but also to the legacy with which they have been entrusted.

“We are excited to see where Pappy & Company takes us in the future and feel thankful for the opportunity to expand our family business in another direction that allows for us to be creative, innovative, and build a business that we are passionate about,” says Greener. “We also feel lucky in the world of brand building and creating a story behind your brand, that with our rich heritage, the groundwork has been set for us. We haven’t had to make anything up or try too hard. we can just be ourselves and do what feels right. so even though starting this business from scratch and continuing to grow our small business comes with plenty of challenges, we have a solid foundation with the values carried on from three generations ago, which is what’s leading us and driving us forward. Lastly, one thing we didn’t expect but have become very thankful for is what our business is doing for our children and future generations. Our children are learning what it takes to run a successful family business, what it means to work hard while learning about their past which, as we all know, can be forgotten in one generation.”